Jim Morris is a veteran who served three tours with Special Forces (The Green Berets) in Vietnam. The second and third were cut short by serious wounds. He retired of wounds as a major. He has maintained his interest in the mountain peoples of Vietnam with whom he fought, and has been, for many years, a refugee and civil rights activist on their behalf.

His Vietnam memoir War Story won the first Bernal Diaz Award for military non-fiction. Morris is author of the story from which the film Operation Dumbo Drop was made, and has produced numerous documentary television episodes about the Vietnam War. He is author of three books of non-fiction and four novels. He has appeared on MSNBC as a commentator on Special Operations. 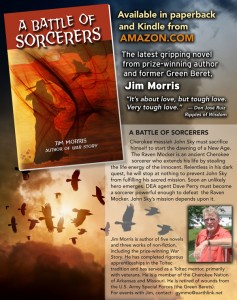